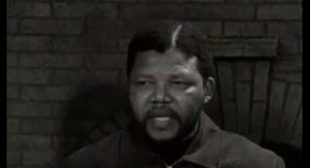 In a Democracy Now! exclusive, one of the nation’s most prolific transparency activists, Ryan Shapiro, reveals he is suing the NSA, FBI and Defense Intelligence Agency in an attempt to force them to open their records on one of the country’s greatest secrets: how the U.S. helped apartheid South Africa capture Nelson Mandela in 1962, leading to his 27 years in prison. The U.S. has never confirmed its involvement, but details have leaked out over the years. Shapiro already has a pending suit against the CIA over its role in Mandela’s capture and to find out why it took until 2008 for the former South African president to be removed from the U.S. terrorist watch list. The NSA has already rejected one of Shapiro’s requests for its information on Mandela, citing “national defense.”