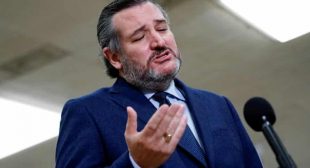 A hunt was taking place on Thursday morning for Ted Cruz, the Republican senator from Texas, who appears to have been photographed lining up for a flight to the sunny Mexican tourist resort of Cancun as millions of his constituents endure deadly power outages and freezing temperatures.

Cruz was reportedly spotted waiting for, then later boarding, a flight to Cancun on Wednesday night. Cancun and the surrounding area is a popular destination for many American vacationers.