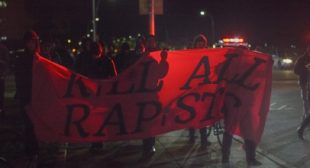 ON SEPTEMBER 28, attorney Michael David filed notice of a claim against the New York Police Department, the City of New York, and two unnamed police officers, referred to as John and Jim Doe. These plainclothes cops, alleged the claim, “brutally sexually assaulted and raped” his 18-year-old female client. David told me that within a day, he needed to amend the claim: The officers had been identified by police in the press as Brooklyn South narcotics detectives Richard Hall and Edward Martins.

“What was strange,” said David, “was that within only two or three hours of me filing, there was a story leaked to the New York Post saying that the detectives were claiming that the sex they had with my client in custody was consensual. They hadn’t even been named yet.” The attorney told me that he believes “the police were trying to get ahead of the story.”

At a time of elevated public awareness about police violence and sexual assault, these detectives’ apparent defensive tack raises troubling questions about the way cops approach these national plagues. Let us be clear: Someone in police custody cannot give consent, in any meaningful sense of the word, to the officer holding them.