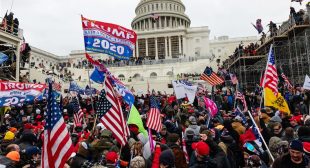 An arm of the Republican Attorneys General Association, a national group representing the top law enforcement officers in their states, sent out robocalls encouraging people to march to the U.S. Capitol the day before the building was stormed by a pro-Trump mob.

“At 1 p.m., we will march to the Capitol building and call on Congress to stop the steal,” said the voice on the recording, which was obtained by NBC News.