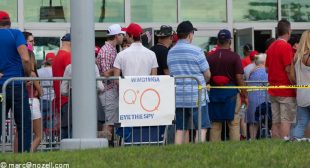 The role of QAnon in the January 6 MAGAist insurrection is becoming clearer by the day. Most readers are familiar by now with its unofficial mascot, be-horned “supersoldier” (and perhaps future WWE Trump tag-team member) Q Shaman. In addition, at least two of the five dead were QAnon adherents. Even the killed police officer followed QAnon influencers on Parler. More