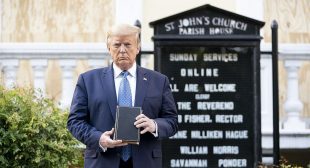 A week after Floyd’s death, on June 1, 2020, nonviolent protesters in Washington, D.C.’s Lafayette Square were demanding justice for him when they were violently removed by police so that Trump and his allies could walk from the White House to St. John’s Episcopal Church — where Trump gave a speech and had his much maligned “Bible photo-op.”

That day, Meacham argued, sealed Trump’s fate in the 2020 presidential election and convinced millions of Americans and “a lot of White people” to vote against Trump and reject “a culture of White supremacy.”