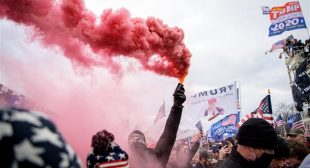 Online far-right movements are splintering in the wake of last week’s Capitol riot, as some radical anti-government movements show signs of disillusionment with the relatively hands-off approach of some QAnon conspiracy theorists amid warnings of future violence.

Users on forums that openly helped coordinate the Jan. 6 riot and called for insurrection, including 4chan and TheDonald, have become increasingly agitated with QAnon supporters, who are largely still in denial that President Donald Trump will no longer be in the Oval Office after Jan. 20.

QAnon adherents, who believe Trump is secretly saving the world from a cabal of child-eating Satanists, have identified Inauguration Day as a last stand, and falsely think he will force a 10-day, countrywide blackout that ends in the mass execution of his political enemies and a second Trump term.