On Telegram, the Paramilitary Far Right Looks to Radicalize New Recruits Ahead of Inauguration Day 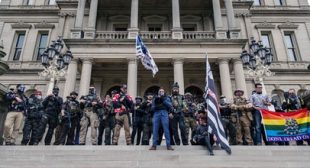 Since the events last week, “Boogaloo Intel Drop,” a channel on the Telegram messaging app with more than 6,600 subscribers, including some self-described active-duty U.S. military personnel, has pushed its followers to usher in a new epoch of political violence in the United States. Subscribers and administrators have called for the murder of police officers with increased fervor and elevated Ashli Babbitt, an Air Force veteran killed by Capitol Police during the riot, to the status of a martyr.

The channel is a mid-sized player in a larger, established network devoted to the spread of right-wing terror, a race war, and the violent overthrow of the U.S. government. Within this so-called Terrorgram network, which appears to have grown in the past week, the assault on the Capitol and its political fallout is being treated as an opportunity to enlist and radicalize new recruits.