More Than Two-Thirds of Students Want Police Out of Schools 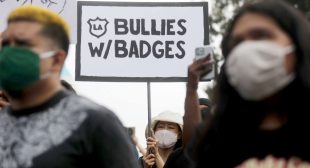 Anew survey of more than 600 middle and high school students across four states finds that 41 percent feel “very unsafe” or “unsafe” when they see police officers at their public schools. One-third said they feel targeted by police based on an aspect of their identity, such as race, primary language, sexual orientation or gender identity, and students reported bullying and sexual harassment by police at multiple public schools.