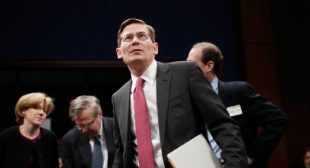 Wednesday night, Morell appeared at an intelligence community forum to “cast doubt” on “allegations that members of the Trump campaign colluded with Russia.” “On the question of the Trump campaign conspiring with the Russians here, there is smoke, but there is no fire at all,” he said, adding, “There’s no little campfire, there’s no little candle, there’s no spark. And there’s a lot of people looking for it.”

Obama’s former CIA chief also cast serious doubt on the credibility of the infamous, explosive “dossier” originally published by BuzzFeed, saying that its author, Christopher Steele, paid intermediaries to talk to the sources for it. The dossier, he said, “doesn’t take you anywhere, I don’t think.”