Is US deploying fighter jets to the Gulf or not ? 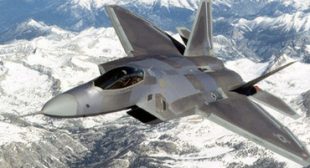 The US says it has deployed a number of its most modern jet fighters to an air base in Southwest Asia. The announcement alarmed many, who suspect the base is actually in the United Arab Emirates just 200 hundred miles from Iran.

The Air Force did not specify the exact number or location of the recently-deployed F-22 Raptors, but confirmed that they had been sent t