The President of Honduras Is Deploying U.S.-Trained Forces Against Election Protesters 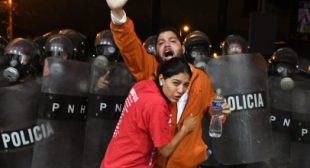 The post-election situation in Honduras continues to deteriorate as Hernández, a conservative leader and stalwart U.S. ally in Central America, has disputed the result of last week’s vote while working to crack down on protests sweeping the nation.