How Trump railed against ‘insurrection’ while encouraging Oath Keepers insurrectionists 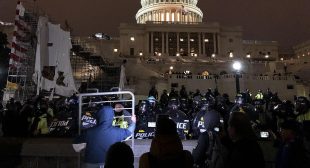 In the 2020 presidential election, then-President Donald Trump ran on a fear-mongering “law and order” platform — insisting that the United States would be overwhelmed by violent crime, looting, chaos and anarchy if now-President Joe Biden were elected and warning that any “insurrectionists” would be dealt with harshly. But Never Trump conservative Amanda Carpenter, in an article published by The Bulwark on June 7, finds it ironic that the same Trump who ranted against insurrection encouraged the insurrectionist Oath Keepers — one of the far-right groups that attacked the U.S. Capitol Building on January 6.