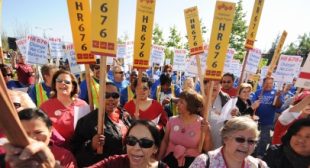 MICHIGAN DEMOCRATIC REP. John Conyers has been introducing his single-payer health care bill for decades. But in the explosion of activism following the Bernie Sanders campaign and the pushback against GOP efforts to repeal parts of the Affordable Care Act, his bill HR 676 has suddenly become much more popular. It now has the support of the majority of the House Democratic caucus.

Last month, a group of activists with the Metro DC Democratic Socialists of America turned its sights to Virginia Rep. Don Beyer, one of the Democrats who had yet to sign onto HR 676.