GOP Wants Tax on Middle Class Instead of Rich for Infrastructure, Sanders Says 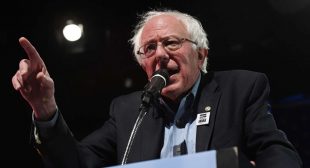 Sen. Bernie Sanders (I-Vermont) said on Wednesday that Republicans are “insistent” upon taxing the working class in order to pay for the upcoming infrastructure bill in lieu of raising taxes on the wealthy and large corporations.

In an interview on CNN, Sanders said that Republicans’ infrastructure pay-fors would disproportionately affect the working class, which has been hit hard by recent economic crises.

“For too, too long, the average American has seen government work for the 1 percent, for large corporations,” Sanders said to CNN’s Wolf Blitzer. “What some of us are trying to do with the president is have government start paying attention to the needs of the working class, which is struggling economically in a way we have not seen for a long, long time.”