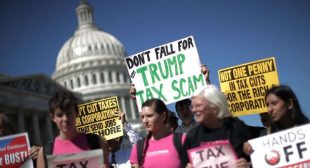 If this Trump tax plan passes, Americans making $60,000 will still be paying over four times more of their income in payroll taxes than Americans who make $1 million… How much did your paychecks total last year? You know the answer, of course. So does the Social Security Administration. The totals for every Americanâs paycheck income are sitting in Social Securityâs computers.Once every year, Social Security does a serious data dump out of those computers to let us know just how much working Americans are actually making. The latest totals â covering 2016 â have just appeared. Most of us, the new numbers show, are simply not making all that much.