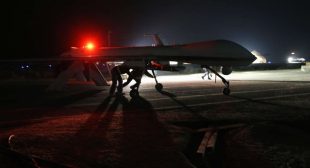 In 2015, Hale, whose job involved identifying targets for drone strikes, provided journalist Jeremy Scahill with secret military documents and slides that exposed shocking details about the U.S. drone program. Hale’s revelations became the basis of “The Drone Papers,” which was published on October 15, 2015, by The Intercept.

Although the government admitted it had no evidence that direct harm resulted from Hale’s revelations, in 2019, the Trump administration charged Hale with four counts of violating the Espionage Act and one count of theft of government property. Facing up to 50 years in prison, Hale pled guilty to one count with the assurance he would not be sentenced to more than 10 years.