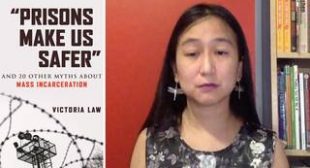 As the first anniversary of the police killing of George Floyd approaches, we speak with author and journalist Victoria Law, who says despite the mass movement to fight systemic racism sparked by Floydâs death, persistent myths about policing, incarceration and the criminal justice system still hinder reform. âWhy do we think prisons keep us safe? Obviously, Derek Chauvin wasnât afraid of being arrested or imprisoned when he killed George Floyd,â says Law, who examines these issues in her new book, â’Prisons Make Us Safer’: And 20 Other Myths About Mass Incarceration.â