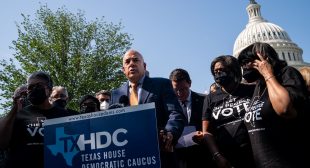 Texas lawmakers in the state’s House of Representatives voted on Tuesday to order state law enforcement to forcibly return Democrats to the legislative chamber, including potentially arresting them, in order to force a vote on implementing restrictive voting provisions in future elections in the state.

The 80-12 vote total did not include dozens of Democrats who remain absent from the legislative chamber. All votes in favor of the warrants were from Republicans, while 11 Democrats who were present, joined by one GOP lawmaker, voted against issuing the warrants.