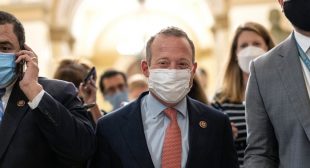 Frustration with a small group of conservative House Democrats boiled over Monday as the party failed to reach an agreement to pass a $3.5 trillion budget resolution, a step that would pave the way for major investments in climate action, Medicare expansion, and other key priorities.

Led by Rep. Josh Gottheimer (D-N.J.), several right-wing Democrats are threatening to tank the budget resolution unless the House first passes a $550 billion bipartisan infrastructure package. Progressive lawmakers and House Speaker Nancy Pelosi (D-Calif.) have rejected the group’s proposed approach, fearing that conservative Democrats would be free to vote against the budget measure if it’s decoupled from the bipartisan bill.