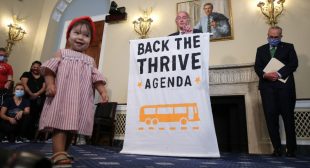 With President Joe Biden set to start unveiling his two-part infrastructure plan later this week, congressional progressives on Monday officially announced their proposal to invest $10 trillion over the next decade in renewable energy, green buildings, and environmental justice initiatives while creating over 15 million well-paying union jobs.

Building on the introduction last September of a resolution “recognizing the duty of the federal government to implement an agenda to Transform, Heal, and Renew by Investing in a Vibrant Economy (THRIVE),” key Democrats have joined with climate, labor, racial justice, and other groups to push for the major investment.

“The THRIVE Act is the agenda that establishes the pillars for economic renewal in our country,” Sen. Ed Markey (D-Mass.), a lead sponsor of the Senate version of the bill, told HuffPost. “This bill lays out a plan for massive job creation within the United States, so that a younger generation of Americans can think of these jobs as careers.”