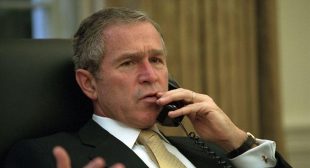 As the United States continues to withdraw its forces from Afghanistan after 20 years of war and occupation, the Taliban say they now control most Afghan territory, surrounding major population centers and holding more than two-thirds of Afghanistan’s border with Tajikistan. Former President George W. Bush made a rare criticism of U.S. policy, saying, “I’m afraid Afghan women and girls are going to suffer unspeakable harm.” But a leading Afghan women’s rights activist says the plight of women in the country has always served as a “very good excuse” for U.S. military goals, while conditions in the country have barely improved. “Unfortunately, they pushed us from the frying pan into the fire as they replaced the barbaric regime of the Taliban with the misogynist warlords,” says Malalai Joya, who in 2005 became the youngest person ever elected to the Afghan Parliament. She says the decades of U.S. occupation have accomplished little for the people of Afghanistan. “No nation can donate liberation to another nation,” she says.