Lie by Lie: A Timeline of How We Got Into Iraq 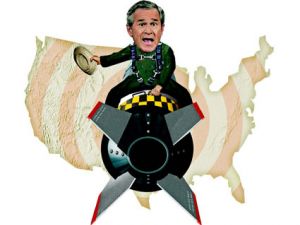 AT A CONGRESSIONAL hearing examining the march to war in Iraq, Republican congressman Walter Jones posed “a very simple question” about the administration’s manipulation of intelligence: “How could the professionals see what was happening and nobody speak out?”

But the blame for Iraq does not end with Cheney, Bush, or Rumsfeld. Nor is it limited to the intelligence operatives who sat silent as the administration cherry-picked its case for war, or with those, like Colin Powell or Hans Blix, who, in the name of loyalty or statesmanship, did not give full throat to their misgivings. It is also shared by far too many in the Fourth Estate, most notably the New York Times’ Judith Miller. But let us not forget that it lies, inescapably, with we the American people, who, in our fear and rage over the catastrophic events of September 11, 2001, allowed ourselves to be suckered into the most audacious bait and switch of all time.