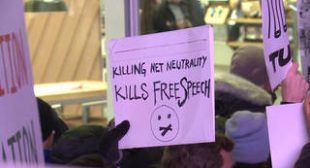 The Federal Communications Commission is set to vote Thursday on whether to repeal the landmark net neutrality protections passed under President Obama in 2015. Net neutrality is the principle that internet service providers treat web content equally and do not block or prioritize some content over others in return for payment. The move could allow internet service providers to cut speeds and jack up prices, and drew a record 22 million comments to the FCC, which critics say the agency has not fully reviewed. âWeâre talking about the future of media here and who has access and control and whose voices are valued, whose stories are told, whose stories are dehumanized,â says Joseph Torres, senior adviser for government and external affairs for Free Press, the national media reform organization.