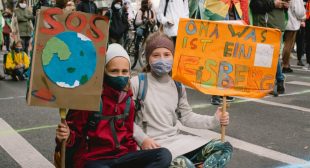 In a ruling hailed as a landmark victory for the climate justice movement, Germany’s top constitutional court said Thursday that the nation’s 2019 climate law violates young people’s “fundamental rights to a human future” by failing to set adequate emissions-reduction targets.

The court ruled that in their current form, the elements of Germany’s Federal Climate Protection Act “governing national climate targets and the annual emission amounts allowed until 2030 are incompatible with fundamental rights insofar as they lack sufficient specifications for further emission reductions from 2031 onwards.”