‘We Are in Deep, Deep Sh*t’: Climate Experts Shocked at Severity of Floods in Germany and Belgium 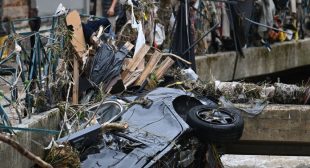 Climate scientists on Friday were stunned by the intensity of flooding in Germany and Belgium that killed at least 120 people and damaged tens of thousands of homes, with experts saying they did not expect such extreme weather to result from the human-caused climate crisis as rapidly as it has.

More than a dozen records for rainfall were set across Western Europe, including in Cologne, where officials recorded six inches of rainfall in just 24 hours on Wednesday into Thursday morning—nearly double the monthly average for July. The city’s previous record for daily rainfall was only three inches.