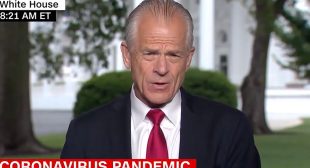 A top adviser to former President Donald Trump pressured agency officials to reward politically connected or otherwise untested companies with hundreds of millions of dollars in contracts as part of a chaotic response to the COVID-19 pandemic, according to the early findings of an inquiry led by House Democrats.

Peter Navarro, who served as Trump’s deputy assistant and trade adviser, essentially verbally awarded a $96 million deal for respirators to a company with White House connections. Later, officials at the Federal Emergency Management Agency were pressured to sign the contract after the fact, according to correspondence obtained by congressional investigators.