Ukraine : Economic Warfare and the IMF 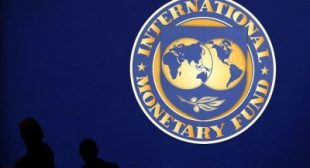 The media’s game of mirrors has been projecting deceitful images of the Ukrainian crisis, such as those of corporations and US and European banks who see their investments in Ukraine go up in smoke and are about to abandon ship before it sinks.

Just when they are about to obtain what they are after: the complete control of the Ukrainian economy.

The rescue rope thrown to Kiev by the IMF and the European Union is in reality a ball and chain. Ukraine’s external debt, as documented by the World Bank, increased tenfold in ten years and exceeds 135 billion dollars. In interests alone, Ukraine must pay about 4.5 billion dollars a year. The new loans will only serve to increase the external debt thus obliging Kiev to “liberalize” its economy even more, by selling to corporations what remains to be privatized.

The conditions attached to the loans are dictated by the IMF, controlled by the United States with 17,5% of the vote (seven times more than Russia) and by other major western powers, while a state like Ukraine is only entitled to half a vote.