Trump Muses About Light as Remedy, but Also Disinfectant, Which Is Dangerous 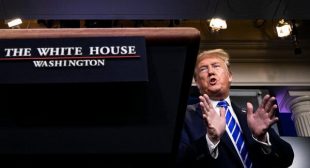 “Supposing we hit the body with a tremendous — whether it’s ultraviolet or just very powerful light,” Mr. Trump said. “And I think you said that hasn’t been checked, but we’re going to test it?” he added, turning to Mr. Bryan, who had returned to his seat. “And then I said, supposing you brought the light inside the body, either through the skin or some other way.”

Apparently reassured that the tests he was proposing would take place, Mr. Trump then theorized about the possible medical benefits of disinfectants in the fight against the virus.

“And then I see the disinfectant where it knocks it out in a minute — one minute — and is there a way we can do something like that by injection inside, or almost a cleaning?” he asked. “Because you see it gets in the lungs and it does a tremendous number on the lungs, so it would be interesting to check that.”