‘Which Side Are You On?’: Poor People’s Campaign Pressures US Senate on Democracy and Justice 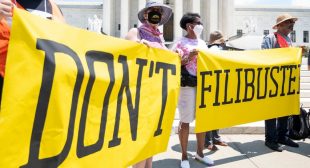 Beginning with a “massive national call-in to every U.S. senator,” the Poor People’s Campaign on Monday launched a monthlong campaign to push Congress to eliminate the 60-vote filibuster, pass the For the People Act, restore the gutted Voting Rights Act, and raise the federal minimum wage to $15 per hour—progressive goals that have been thwarted by a combination of Republican obstructionism and Democratic acquiescence.