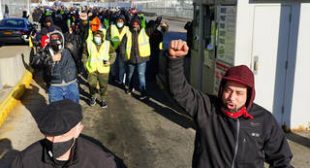 Workers at the Hunts Point Produce Market in New York City have overwhelmingly approved a new three-year contract, ending a week-long strike that captured national attention and galvanized the community behind the essential workers at the Bronx-based business. Some 1,400 members of the Teamsters Local 202 union walked off the job on January 17, demanding a $1 raise and recognition for their work to keep New Yorkers fed during the pandemic, with the Hunts Point Market supplying about 60% of the city produce. Management had offered a 32-cent raise instead.

But after a week on the picket line and widespread support from the community, workers won raises of $1.85 per hour over three years, as well as improved terms for family health benefits. âThey were resolved with each other, and they were standing shoulder to shoulder with each other on the basic premise of being treated decently,â Daniel Kane, president of Teamsters Local 202, says of the workersâ job action. âThey fought, and they came away with their dignity.â