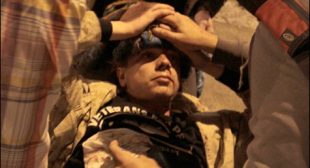 The City of Oakland has agreed to pay a $4.5 million legal settlement to Scott Olsen, the 24-year-old Marine Corps veteran who was critically wounded by Oakland Police on the night of October 25, 2011 during a chaotic confrontation between law enforcement and Occupy Oakland demonstrators. Police had evicted the Occupy Oakland encampment from Frank Ogawa Plaza that morning, prompting thousands of people to return to downtown that afternoon.