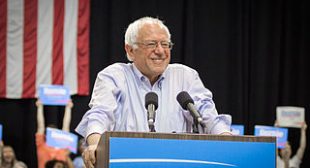 With more than 1 million people watching at home, and hundreds watching from the studio audience, Sen. Bernie Sanders (I-Vt.) leaned across his desk with a crucial health-care question.

“What’s the quality of the Norwegian system?” Sanders asked Meetali Kakad, an Oslo-based health researcher. “Is it good?”

In her view, it was: “Far better than Canada.”

Sanders’s “town hall on Medicare for All,” an event he’d organized after becoming convinced that it would never be produced by the mainstream media, never got more combative than that. Over 100 minutes, Sanders and nine guests — three at a time, taking turns — discussed the need to bring about single-payer health care, its benefits to business and its implementation around the world. (Kakad’s Canada joke was aimed at Danyaal Raza, there to defend his country’s system.)