World Is on ‘Brink of a Catastrophic Moral Failure,’ WHO Chief Denounces Vaccine-Hoarding by Rich Nations 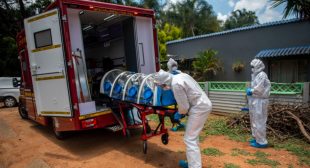 “I need to be blunt: the world is on the brink of a catastrophic moral failure—and the price of this failure will be paid with lives and livelihoods in the world’s poorest countries.”

That ominous warning comes from the head of the World Health Organization (WHO), who on Monday criticized wealthy countries and pharmaceutical companies for pursuing their own coronavirus vaccine arrangements, even though such a nationalistic and competitive approach to inoculation threatens to magnify deadly global inequalities while prolonging the Covid-19 pandemic and associated economic crisis.

“Even as they speak the language of equitable access, some countries and companies continue to prioritize bilateral deals—going around COVAX, driving up prices, and attempting to jump to the front of the queue,” said WHO Director-General Tedros Adhanom Ghebreyesus, speaking from the United Nations headquarters in Geneva at the start of the WHO executive board’s week-long virtual meeting. “This is wrong.”