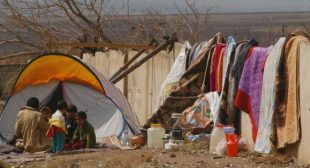 As the death toll from the “horrific” earthquake that struck the Iran-Iraq border earlier this week climbs above 500, and as President Donald Trump remains entirely silent on the matter, Sen. Bernie Sanders (I-Vt.) and four Democratic senators sent a letter on Thursday to Secretary of State Rex Tillerson demanding that the White House waive certain sanctions on Iran and allow aid to reach those desperately in need.

“After earthquakes in 2003 and 2012, the United States demonstrated its compassion and goodwill by offering assistance to the Iranian people and allowing private relief donations,” the senators wrote. “This time should be no different.”