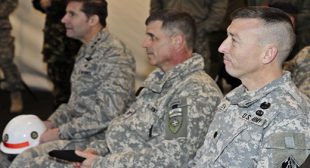 s the Russian occupation of the Crimea a case of aggressive expansionism by Moscow or aimed at blocking a scheme by the North Atlantic Treaty Organization (NATO) to roll right up to Russia’s western border? WikiLeaks has revealed a secret cable describing a meeting between French and American diplomats that suggests the latter, a plan that has been in the works since at least 2009.