Why Does the United States Support Israel? 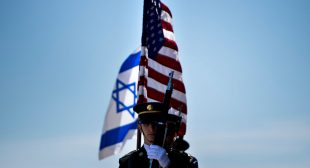 As Israel again wields brutal military power on a captive Gaza, trapped Palestinians seem numb with resignation. Tweets from the ground reveal Palestinians preparing for the worst, scrambling to gather their entire families so they can all die together. They read less like cries for help and more like goodbyes.

It can be hard to tell from the United States, but Israeli occupation and apartheid are highly unpopular across the globe. That’s been true since Israel was established in 1948.

Yet Israel today has diplomatic relations with most of the world, due in large part to the maneuverings of the United States. Washington worked hard to normalize Israel and integrate it into the world economy. The United States has a “special relationship” with the state of Israel, as characterized by the US State Department: