US military spending is more than all the other countries combined 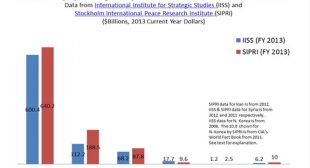 Our military budget has grown way beyond that which the British used as a yardstick while they were trying to control an empire where the sun never set. Yet the alarm bells continued as the House of Representatives marked up and debated the FY 2015 budget. The chairman of the House Armed Services Committee, Rep. Howard “Buck” McKeon (R-Calif.), thinks we are ruining our national defense capacity with even partial cuts and told the Heritage Foundation in a recent speech, “In next year’s bill, we’re going to have to whittle our ‘big stick’ down to a twig.”