Trump’s chief strategist Bannon: ‘No doubt’ the US will be at war with China in the next few years 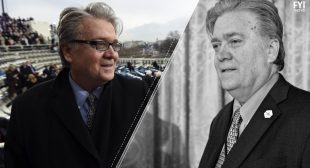 Steve Bannon, the assistant and chief strategist to President Donald Trump believes the U.S. will be at war with China within the next few years.

Speaking on his radio show in March 2016, Bannon predicted relations between the U.S. and China would ultimately escalate to conflict over the next decade.

“We’re going to war in the South China Sea in five to 10 years, aren’t we?” said Bannon.