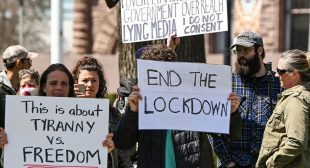 A similar pattern played out across the country. Deadlines were imposed. Blood oaths were taken. Anxieties grew. Americans of seemingly sound mind swore they’d never get vaccinated against their will. Then — obedience. The people who said they’d never do what they were told did what they were told. The people with so many “reasons” for being against vaccines forgot all about those “reasons.” The people whose identities were built on “beliefs” decided those “beliefs” weren’t as important as the consequences of keeping them.