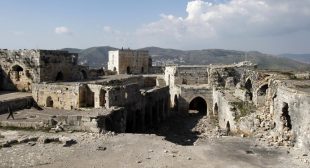 The Syrian army secured the Crac des Chevaliers – one of greatest medieval castles in the world – on Friday after Assad’s forces reclaimed the UNESCO World Heritage site from rebel fighters a day earlier.

The seizure of the castle is the latest in a number of successes for the Syrian army over recent weeks, including the capture of Yabroud on Sunday. Close to the Lebanese border, Yabroud is considered a key supply line to and from Syria. Syrian forces have also seized at least four towns and villages near the Lebanese border in the past two weeks, AP reported.

“Our efforts, those of the Syrian Arab Army and the National Defense Forces, were crowned today by raising the Syrian flag on the Crac des Chevaliers,” an unnamed Syrian army colonel told Al Mayadeen TV, a Lebanese broadcaster that aired footage of Syrian soldiers at the site. “The battle had been going on for more than a month during which several nearby villages were liberated.”

Syrian state television reported that troops “wiped out terrorists who were entrenched in the castle,” according to AP.