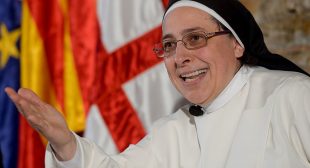 A Catholic nun in Spain has caused outrage after she suggested that the Virgin Mary may not have been a virgin after all. The controversial Dominican nun invited the ire of the Catholic Church who responded to her statements in anger.
Sister Lucia Caram was speaking on a talk show over the weekend when she let slip her belief that contradicts one of the key pillars of her faith.

“I think that Mary was in love with Joseph and that they were a normal couple, and the normal thing is to have sex,” Caram told Risto Mejideon during Sunday’s Chester in Love programme.