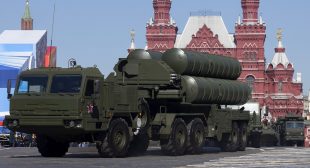 While NATO was initially just complaining the S-400 was incompatible with their own systems, top NATO General Petr Pavel told reporters this week that Turkey is likely to be punished by the alliance for not buying American.

“The principal of sovereignty obviously exists in acquisition of defense equipment, but the same way that nations are sovereign in making their decision, they are also sovereign in facing the consequences of that decision,” Pavel insisted.