Manufactured Crisis. The Untold Story of the Iran Nuclear Scare 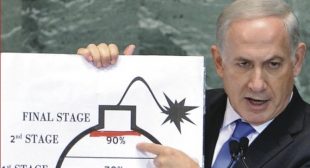 Since the early1990s, Israel, U.S. officials and their submissive European allies, supported by their uncritical and subservient media, have been peddling allegations, fabrications, accusations and lies that the government of Iran was pursuing a secret, military adjunct to its regularly inspected civilian nuclear program. The main thrust of Porter’s book is to demonstrate that this crisis was „manufactured“ and the accusations were bogus, i. e. Iran never had a military nuclear program. For over 20 years Israeli politicians have been claiming that Iran’s nuclear device was just around the corner.

Despite the political hullabaloo and Netanyahu’s call for military actions against Iran’s nuclear installations. „Netanyahu never intended to use military force against Iran, and the Obama administration was well aware of that but was hoping to exploit the threat to gain diplomatic leverage on Iran“, writes Porter.