Killed over a Car Air Freshener: Outrage Grows over Police Shooting of Daunte Wright in Minnesota 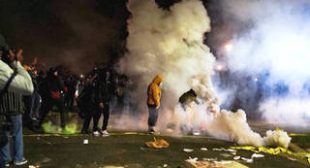 Protests continue in the Minneapolis area after a white police officer shot and killed a 20-year-old Black man, Daunte Wright, during a traffic stop Sunday in the suburb of Brooklyn Center. The deadly shooting took place about 10 miles from where former Minneapolis police officer Derek Chauvin is on trial for killing George Floyd. Just before he was killed, Wright called his mother to say he was being pulled over â allegedly because an air freshener was obscuring his rearview mirror. The Brooklyn Center police chief claims Kimberly Potter, a 26-year police veteran who has served as the police union president for the department, accidentally pulled a gun instead of a Taser. The Star Tribune reports Daunte Wright is the sixth person killed by Brooklyn Center police since 2012. Five of the six have been men of color. âUnfortunately, there has not been a serious attempt to change the phenomenon of driving while Black, which is something that happens to Black people on a routine basis in the Twin Cities and across the state of Minnesota,â says Minneapolis-based civil rights attorney and activist Nekima Levy Armstrong. We also speak with Jaylani Hussein, executive director of the Minnesota chapter of the Council on American-Islamic Relations, who says policing in the United States is as dangerous to Black and Brown people as ever. âThey are deadly. They kill Black and Brown people,â says Hussein.