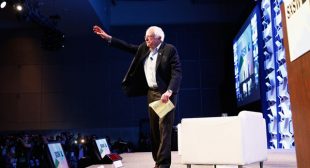 In a wide-ranging speech viewed by more than 11,000 people from over 30 countries, Sen. Bernie Sanders (I-Vt.) on Sunday commemorated the 15th anniversary of the US invasion of Iraq by highlighting its devastating consequences and issuing an urgent call for a global agenda that pursues “peace, not war” and “development, not destruction.”

“We need to invest in our children, in our elderly, and in healthcare and education and environmental protection. We do not want more and more war,” Sanders said. “People in my country, the United States, and all over the world are sick and tired of spending billions and billions of dollars on nuclear weapons, war planes, missiles, bombs, and tanks.”