Extractive Companies Are Privatizing Repression and Counterinsurgency in the Americas 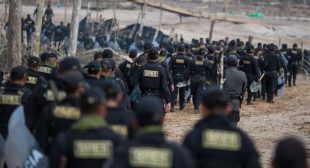 As activists increasingly confront extractive industries, militarized repression of those protests has become a growing and lucrative business. This phenomenon is salient across much of the world, including the U.S., where fossil fuel companies are funneling money to police departments that repress anti-racist and environmental justice movements. However, private security is a particularly growing business in Latin America, which is also the world’s deadliest region for water and land protectors.

Latin America has more private security personnel than police officers. In countries like Peru, where the most common and deadliest conflicts are over mining projects, companies are increasingly relying on both public armed forces and their own private security to protect their investments.