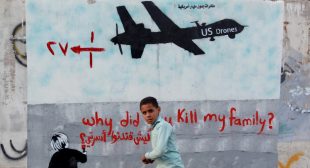 President Joe Biden faced a fresh call to fully end “forever wars” after his administration released former President Donald Trump’s secret rules regarding the use of lethal strikes outside of designated war zones.

The Biden administration released the partly-redacted 11-page document, “Principles, Standards, and Procedures for U.S. Direct Action Against Terrorist Targets,” late Friday to the ACLU and New York Times, which had both filed transparency lawsuits to see the guidelines.