Colombia on the Brink 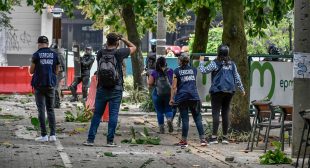 In the last week, Colombia has experienced the most widespread civil unrest of its modern history. Since Wednesday, April 28th, millions of people have taken to the streets to fight back against a regressive national tax reform bill. The bill, farcically called the “law of sustainable solidarity,” aimed to cover budgetary shortfalls resulting from the paralysis of the economy brought on by COVID. In fact, the legislation was a cynical attempt by right-wing President Ivan Duque to shift the burden of the economic crisis onto those who can least afford it.