But What About Hamas Rockets? 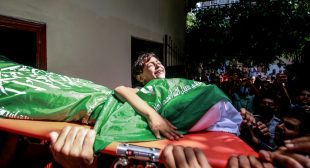 The U.S.-backed, armed, and funded extreme right-wing government of Benjamin Netanyahu is currently engaged in a systemic collective punishment campaign against the people of Gaza. More than two million of them are trapped in an open-air prison camp with nowhere to run or hide from this scorched earth operation. Children are being slaughtered. Civilian residential buildings are being razed to the ground. Meanwhile ethno-nationalist militias are rampaging through the streets of Israel and terrorizing their Arab neighbors in a campaign of organized mob violence. We must be clear: what started this immediate horror was the intensification of Israel’s ethnic-cleansing campaign against Palestinians in East Jerusalem, forcibly evicting people from their homes to hand them over to Israeli settlers. The incendiary situation was then exacerbated during a Ramadan siege by Israeli forces at one of the holiest sites in Islam, the Al Aqsa mosque in Jerusalem.